Ram Gopal Varma opens the first part with the story of how Dawood Ibrahim grew up to be a gangster in a short time. The story is about how Dawood Ibrahim (Ashwat Kanth) worked under his brother Shabir Ibrahim and eliminated some of the big heads of Mumbai and become a famous name in the underworld.

Where did Dawood Ibrahim, now known as the Underworld King of the world, actually start? What is his family background? Why was the son of a constable influenced by these gang wars? Mumbai is calm now, but what were the conditions then like when Dawood Ibrahim stepped into the underworld forty years ago? The film was made with the elements.

Who interested in the underworld, as well as Ram Gopal Varma fans should watch D Company. RGV Mark is not to be missed anywhere and the D Company film goes on interestingly throughout. If not, there are chances that the Telugu people will be a bit confused as they are all unknown faces but the film went on interestingly. Almost everyone looks like Bollywood actors. Both the heroines have done Telugu movies in the past so they are introduced to Telugu people. But since all the other characters are Bollywood actors, Telugu people can’t connect so quickly. However, with Ram Gopal Varma Mark in the film, the chances of the film being a success are high.

Overall, Ram Gopal Varma’s D Company is about Dawood Ibrahim is an intelligent criminal who used his brain to create the big heads of Mumbai and become a famous name in the underworld enterprise in a short time. Go and Watch D Company Movie Online Streaming Now on Spark OTT. 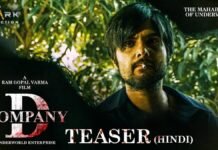