Actress Lakshmi Manchu is all set to host a cookery show titled Aha Bhojanambu which will be streaming on Aha very soon. Aha Bhojanambu Cooking Show is solely aimed to explore the personal side of celebrities while cooking scrumptious meals along with Lakshmi Manchu. Aha unveiled a special poster in which Manchu Lakshmi can be seen holding a vessel in front of the table where all kinds of vegetables and boiled chicken are placed.

The official Twitter handle of Aha made an announcement on the show today, by tweeting “Ready aipondi. Lakshmi Manchi mee favourite stars tho vachestunanru. Vallatho maatalu, navvulu, and konni vintha vantalu”. The news is now doing headlines and having Manchu Lakshmi as a poised host who already made an indelible mark is an exciting and fun factor.

Lakshmi Manchu previously hosted a few talk shows and she is trying something new with Bhojanambu now. More details about the Aha Bhojanambu will be unveiled soon. 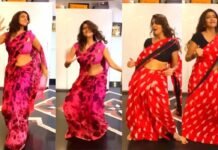