The Film critic Kathi Mahesh in Critical Condition after the vehicle in which he was traveling met with an accident at Chandrasekharapuram village in Kodavalur Mandal of Nellore district, Andhra Pradesh. The accident occurred on Friday night. Kathi Mahesh is said to be in critical condition, on ventilator support at Medicover Hospital in Nellore town.

Kathi Mahesh has suffered some injuries in a road accident involving his car and a lorry on #Nellore Highway. He has been taken to the hospital for treatment. pic.twitter.com/5pp6XQD7ud

Going by the pictures that surfaced on social media, the front part of the four-wheeler Innova Crysta was completely damaged. It appears that he suffered minor injuries on the face initially. The airbags at the seat were popped out due to the impact of the collision.

It is learned that Kathi Mahesh was traveling along with his driver when the accident occurred. Tipped by the information from the driver, the police and the highway patrolling staff rushed to the spot and shifted Kathi Mahesh to the hospital. His family and relatives reached the hospital in Nellore this morning. 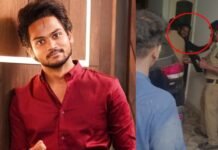