Jabardasth Mukku Avinash Eliminated From Bigg Boss Telugu 4: The world’s biggest reality show Bigg Boss 4 Telugu is hogging all the limelight since its launch. Bigg Boss Telugu 4 has been going on well and the contestants of the show have been making the show interesting with their fights. It’s time for the next eviction in Bigg Boss Telugu season 4. Five contestants- Avinash, Abhijeet, Harika, Akhil, and Monal Gajjar – were nominated for eviction this season.

As per the latest reports, Avinash is most likely to get evicted from the show. However, an official confirmation is expected in Sunday’s episode. Finally, we are nearing to witness this week elimination, Host Akkineni Nagarjuna is all set to show an exit door to one of the contestants from the nomination list. It is worth mentioning that Abhijeet, Harika, Akhil, saved from this week’s elimination with their audience support.

The last contestant that was evicted from the house was Lasya, however, the latest one to leave the Bigg Boss house is Mukku Avinash. As per the latest buzz on social media and from some sources Avinash got eliminated from Bigg Boss. Although it’s confirmed, the confirmation will only get this weekend. This piece of news will surely disappoint Avinash fans as his elimination came as a huge shock to them.

Initially, there were reports that Monal got eliminated and, but now Avinash got eliminated from Bigg Boss 4 Telugu house, and it is Bigg Boss strategy and anything can happen in the house at any point of time, and there might be a double elimination in that case both Avinash and Monal Gajjar might also step out of the house. 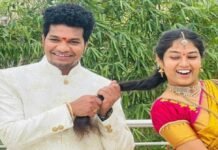 Mukku Avinash gets Engaged with Anuja