Telangana Bathukamma Sarees Distribution will be kickstarted across the State on October 9 ahead of Bathukamma festival 2020 celebrations to begin on October 17. The Handlooms and Textiles Minister KT Rama Rao said the sarees will be delivered to the beneficiaries at their door-step in the wake of COVID-19 pandemic. The Telangana State government is spending Rs 317.81 crore to distribute about 1 crore sarees among women aged above 18 years and having white ration cards. Along with Ministers P Sabitha Indra Reddy and Satyvathi Rathod, Rama Rao inspected the displays of Bathukamma sarees at Haritha Plaza hotel in Hyderabad. Handlooms and Textiles Director Shailaja Ramaiyer and other officials accompanied them. The Bathukamma sarees are manufactured in 287 designs with golden and silver coloured zari work on the edges.

Speaking on the occasion, Minister KT Rama Rao said the Telangana State government had spent about Rs 1,033 crore to distribute four crore Bathukamma sarees over the past four years since its launch in 2017. About 30 lakh metres of cloth was produced by thousands of weavers through 26,000 powerlooms in the State. A total of 99 lakh sarees will be distributed this time,” it said.

KT Rama Rao said the state government is ensuring that uniforms for students studying in state-run schools and sarees in KCR Kits were given to Telangana weavers. KTR further said the Telangana government had been working towards the welfare of the weavers’ community and in the past six years had introduced many welfare schemes exclusively for the weavers. The Telangana government started the Bathukamma Sarees Distribution among women belonging to Below Poverty Line (BPL) families in 2017. In 2018, the Election Commission stopped the program because of the Assembly elections. 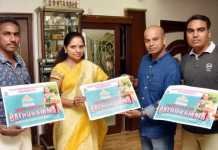