As part of the contest, photographers can send two of the best photos related to the festival along with an entry fee of Rs 200. The three best pictures will win cash prizes of Rs.15,000, Rs.11,000 and Rs.9,000 respectively while seven more consolation prizes worth Rs. 5,000 each are also up for grabs.

It starts on the day of Mahalaya Amavasya and the 9-day festivities will culminate on “Saddula Bathukamma” or “Pedda Bathukamma” festival on Ashwayuja Navami, popularly known as Durgashtami which is two days before Dussehra. Bathukamma is followed by Boddemma, which is a 7-day festival. Boddemma festival marks the ending of Varsha Ruthu whereas the Bathukamma festival indicates the beginning of Sarad or Sharath Ruthu. 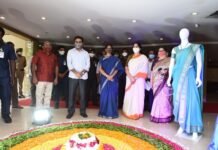