Theprimetalks.com
Home Bollywood Udta Punjab Hindi Movie Review Rating Hit or Flop Public Talk
Advertisement
Udta Punjab Review :  Welcome to the Chaubey’s Punjab a world you may not inhabit, but cannot ignore. As notorious as Mexico in the current context, the state that is known for wrestlers and wheat, serves up heroin, opium, cocaine faster than parathas and lassis. Yes, Punjab the land of the five rivers, is a description only reserved for the text-books. In reality, it’s a place besieged by cartels, cocaine and corrupt cops. 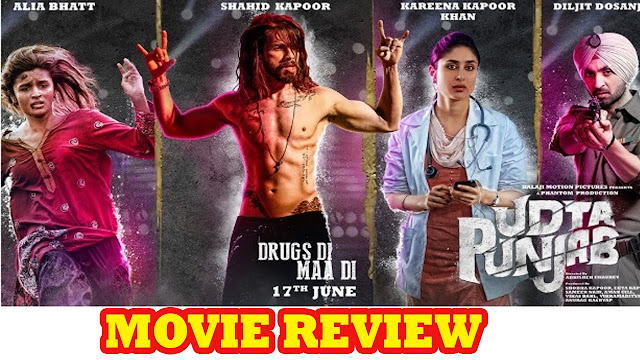 Udta Punjab Movie Story : The movie opens with Tommy Singh, a rapper doing drugs along with many other youngsters. He gets arrested on his birthday, along with his friends due to possession of drugs. A heavy drug addict, he later realizes, while spending time in jail, what a bad message he is leaving. Actress Kareena Kapoor is Preet, a doctor and also a social activist, who is campaigning against this entire drug mafia and abuse. Diljit Dosanjh is Sartaj Singh, initially a corrupt police officer, who lets off all the vehicles filled with narcotics and drugs, until he realizes that his brother has now become an addict himself. Alia Bhatt is a farmer from Bihar, who chances upon drugs near the Indo-Pak border.The rest of the Film is all about how these four characters are entangled in the biggest drug racket of Punjab. Watch looks of shahid kapooralia kareena transform for udta punjab
Performance : Actor Shahid Kapoor has got a role of a life time once again. He fits the bill perfectly as Tommy Singh. As a cocaine addict, he has shown some stellar performance. Kapoor managed to get the perfect looks. But in some scenes, it looks like ‘Over acting’. But may be that is how an ‘Addict’ behaves ! Alia Bhatt with brown make-up did a neat job. As an immigrant she has picked up the perfect Bihari accent. She shines in the scene where she gets harassed by the men. However her hockey flashback never makes any impact. Kareena Kapoor as Doctor preet is just mindblowing. She shows her maturity and takes the character on a serious lane. Diljit Dosanjh makes his debut and he does some neat role. Satish Kaushik does a good job as Tayaji even with his little role.
Advertisement
Technicalities : Coming to the direction of the Udta Punjab film, Abhishek Chaubey has done a good job! However, we think editing of the film could have been better. The make-up artists of the film have done a fantastic job and you will be surprised at how real all the characters are looking on the screen! The ending of the film is little abrupt but here, we can’t complain, as the theme of film is based on the real problem of the nation and the current scenario of Punjab is way too worse! So, it might be possible that keeping this fact in mind Abhishek Chaubey has given an abrupt ending to the film rather than a happy one!
Analysis : The Film really has some defining moments and that shows how drugs brings out the monster inside us. The movie also says that Punjab will soon be a Mexico and it would be run by Drug lords. But still the preaching is not in right lane. Climax is a big let down. Kudos to director for handling an alarming issue. But the execution ? It has been sluggish. Characters such as Tommy’s manager are left as loose ends in the story post interval. When things get too intense, the Police inspector and doctor comes ‘Close’ ! Seriously ? Despite loopholes, the movie gets its accolades for the right message.
Udta Punjab Movie Rating – 2.5/5
Final Vedict : On the whole UDTA PUNJAB Movie is a dark and serious film that does not offer the traditional entertainment that audiences seek from Bollywood movies. At the same time, it is bold and brave in parts with strong performances by all actors.Udta Punjab Movie Review Rating .
Advertisement