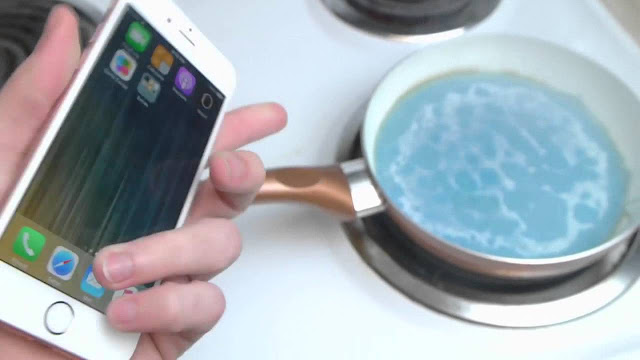 iPhone 6S In Melted Crayons: You know how it is. You’re in your kitchen, boiling up your blue crayons, stirring a spoon in one hand, iPhone in the other. As you scroll through your Twitter timeline, your phone slips from your hand, landing straight in the mass of melting blue goo. Will the handset survive?
Today, we have something new to show you involving the Apple iPhone 6s and a lot of blue crayons placed in a frying pan. The pan is placed on a stove, melting down the crayons.once the crayons are melted down to a liquid goo, the iPhone is placed in the pan. After awhile, the iPhone 6s is encapsulated by the wax from the melted crayon.
After being taken out of the pan briefly, the iPhone 6s is put back into the boiling mess and catches on fire. “This is not good,” said YouTuber TechRax. In fact, he says it twice. Soon, he has two fires to worry about. And at the end of the video, a beautiful Rose Gold Apple iPhone 6s is destroyed. Well, at least he didn’t set the date back to 1/1/70.If you want to watch a Video iPhone torture test. Do not try this at home!

Don’t Ever Boil an iPhone 6S in Crayons!