Theprimetalks.com
Home News What Bernie Sanders Said About Viral Memes on Him
Advertisement

After his iconic look at the US presidential inauguration sparked thousands of internet memes across the world, US Senator Bernie Sanders said that he was “just sitting there trying to keep warm.” Standing out in a crowd of glamorously dressed guests, Bernie Sanders showed up for the inauguration ceremony of Joe Biden and Kamala Harris in a heavy winter jacket and patterned mittens with a photo of him sitting bundled-up spawning various viral memes.

The Social media users were quick to superimpose a shot of the former US presidential candidate, sitting cross-legged, on a wide variety of photos. One placed Mr. BernieSanders on a bench next to Tom Hanks in “Forrest Gump“, another put him in detention with the teenagers from “The Breakfast Club“, and he also made it into numerous “Star Wars” scenes. Reacting to the memes, Mr. Bernie Sanders, on the Late Night show with Seth Meyers, said: “I was just sitting there trying to keep warm, trying to pay attention to what was going on.” He added that he has seen some of the viral memes.

The mittens were created by Jen Ellis, who said on Twitter that she made them from repurposed wool from sweaters and lined them with fleece made from recycled plastic bottles.

I made Bernie’s mittens as a gift a couple years ago. They are made from repurposed wool sweaters and lined with fleece (made from recycled plastic bottles). #BerniesMittens pic.twitter.com/lTXFJvVy9V

Many internet users also made memes on the envelope that Mr. Bernie Sanders was carrying during the ceremony and wondered what was inside it. To this, the US senator said: “I’d love to tell you… It’s top secret.” 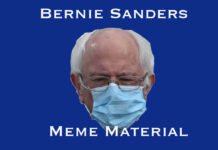