Theprimetalks.com
Home Tollywood Watch Venkatesh’s Babu Bangaram Telugu Movie Teaser
Advertisement
Babu Bangaram Movie Teaser : Babu Bangaram is one of the upcoming and most awaited movie featuring Venkatesh in the main lead role. The movie features Nayantara sharing screen space with Venkatesh. This is the third time the duo are acting together in a movie. Earlier the couple had acted in the two block buster movies Thulasi and Lakshmi which had landed the producers in profits. 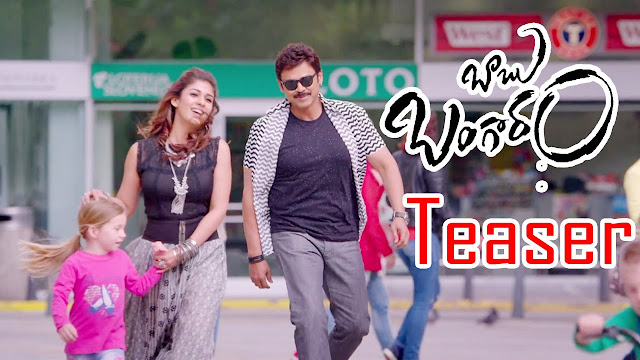 Now the duo are pairing up once again to entertain the fans with Babu Bangaram Movie which is directed by Maruthi. The movie is bankrolled by S.Naga Vamshi and S.radha Krishna under the production banner Sitara Entertainments. The Music for the movie had been composed by Ghibran.

Babu Bangaram Movie Teaser Review :Venkatesh is also a daring police officer in Babu Bangaram. So, other than a short dose of romance, we also witness some action in the teaser.Venkatesh looks badass as an aged cop with his shades on, as he beats the hell out of goons. The best part about the entire teaser is the swag and attitude of Venkatesh as ACP Krishna. It looks like he is a real softie and beats only when he has to. So there is a scene where beats a bad guy brutally and then feels bad for it the next instant. Looks like we have a real quirky cop in our hands.As for Nayanthara, she looks beautiful as ever. Lets hope that she is used to her full potential and doesn’t end up as eye candy.