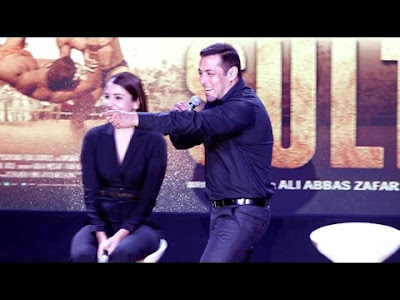 Recently in a press conference during the trailer launch of “Sultan”, when journalist asked Salman a question regarding the same, he reacted in such a hilarious way which made even Anushka Sharma laugh.Well, the journalist’s question seems to be a good one going by the dialogs in Sultan’s trailer but she would never have thought Salman would react this way!

Her question was based on this dialog of the movie, “Jaise Doctor Ki Shaadi Doctor Se Hove Hai, Engineer Ki Engineer Se, Waise Pehelwan Ki Jodi Pehelwan Se Hi Banegi Na”! And since Salman Khan is an actor by profession, she asked whether he would marry an actress to which Salman gave an unexpected and funny answer!Funny and a good way to escape answering the question, isn’t it?