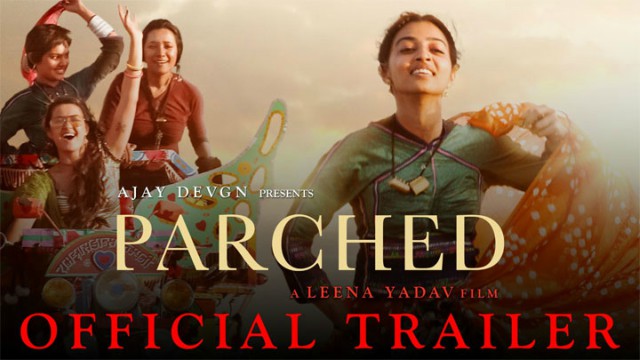 Parched Movie Trailer: Parched is the upcoming Bollywood film which is being produced by Ajay Devgan and the film had been screened in Toronto Film Festival of 2015 in special presentations category. The Parched movie features Radhika Apte, Tannishtha Chatterjee, Surveen Chawla, Adil Hussain, Leher Khan and Sayani Gupta playing the lead roles.The makers had released the Parched official theatrical trailer of the movie on youtube.

The Parched movie story of three ordinary women of North Western region named Rani, Lajjo and Bijli who wanted to  to break free from century-old traditions that have kept them locked in servitude and social evils like  financial difficulties, spousal and familial rape, and physically and emotionally abusive alcoholic husbands.
Advertisement
The twist to the story comes when Rani discovers Janki is dishonored in her village, Lajjo is tired of the brutality of her husband, and Bijli is jealous of a new girl who might replace her. This leads to a journey of freedom and finding solace in each other together. The Parched movie is produced under the banner Ajay Devgan Films.
The music for the movie had been composed by Hitesh Sonik and the cinematography of the flick is handled by Russel Carpenter. The editing of the flick is handled by Kevin Tent. The Parched movie had been scheduled for a grand release on September 23, 2016 in India.