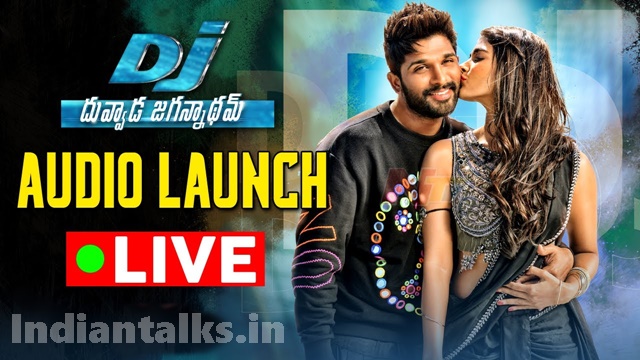 Duvvada Jagannadham Audio Launch Live: The FilmMakers of Allu Arjun’s DJ-Duvvada Jagannadham have released its audio track list and Dj full songs jukebox online this morning and have planned the audio launch of DJ aka Duvvada Jagannadham on Sunday evening at 6:00 PM is being held at Shilpakala Vedika in Hyderabad.
Dil Raju has reportedly shelled out a hefty sum of on the grand arrangements of this function. Megastar Chiranjeevi is reportedly attending this event as the chief guest. Along with the cast and crew and crew of the film, some celebs from the Tollywood industry are also expected to grace this occasion.
Duvvada Jagannadham Audio Launch Live in TV 9 if you are watching it on TV. Otherwise, if you want to watch the live streaming online, the live streaming is provided by Aditya Music in its youtube channel as well as TV 9 YouTube channel.
DJ aka Duvvada Jagannadham has five peppy songs with foot-tapping music and Devi Sri Prasad has composed the tunes for the soundtracks. The SVC‏ revealed its track list on Saturday evening. Besides tweeting a poster, the producer. “The tracklist of #DJ #DuvvadaJagannadham.” Here is the complete track list of the movie.
The filmmakers of Duvvada Jagannadham have organized for a Dubsmash contest to make things even more interesting. Fans need to make a Dubsmash video by delivering the dialogues from DJ’s latest trailer and send it to the official Facebook page of Dil Raju or on Twitter with the hashtag #DJDubSmash.
Advertisement