Theprimetalks.com
Home Kollywood Watch Dhanush’s Thodari Tamil Movie Official Trailer Released
Advertisement
Thodari Movie Trailer  : The up coming Movie of  Dhanush subsequent to making his nearness with the motion picture Thanga Magan is titled as Thodari. The film is getting ready for a massive release soon. The thodari film unit wrapped up the entre part of the film’s shoot and are pretty much excited about bringing it soon to the fans and movie lovers. Thodari also stars many popular actors like Radha Ravi, Nasser, and Ganesh Venkat Venkatraman. 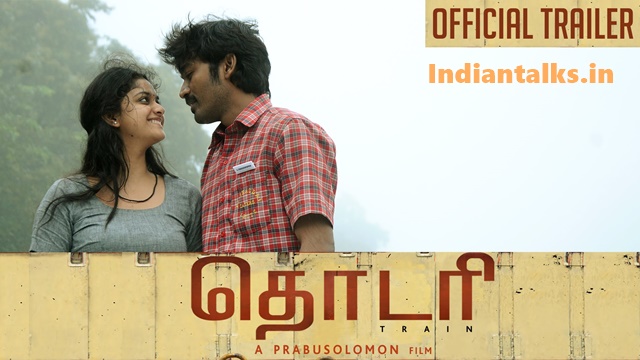 Advertisement
The music for the film is composed by D Imman. Many hit numbers have been produced by Imman-Prabhu Solomon duo, which includes songs of Kumki.The camera has been cranked by V Mahendran, and the project is bankrolled by Sathya Jyothi Films.
The film also has enormous scope for comedy since it has Thambi Ramaiah, a frequenter in Solomon’s movie, and Karunakaran in main roles.Going by the trailer, the film is a racy adventure about a hijacking of a train. Dhanush is seen as a caterer in the film and is seen locking horns with Harish Uttaman.