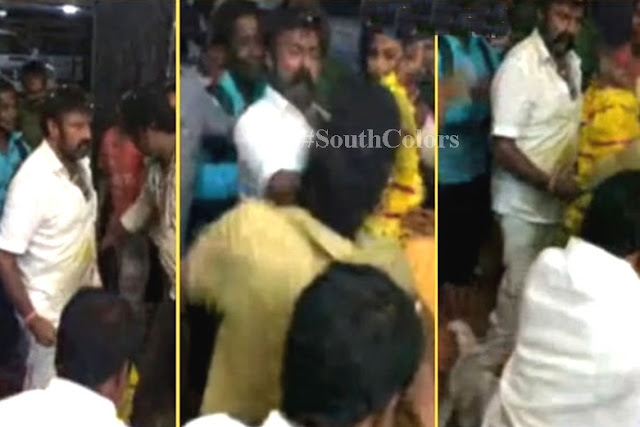 Actor and politician Nandamuri Balakrishna has slapped someone again fans. Balakrishna was campaigning for by-elections in Nandyal, where his party, TDP is in a neck-to-neck battle with Jagan Mohan Reddy’s YSR Congress. The incident happened yesterday night when the fan tried to garland him and get very close.
He also tried to click a selfie with his favourite star. The actor slaps him and pushes him away. The incident was caught on camera and video goes viral on social media.
This is not the first time he has attacked fans. Earlier this year, during his visit to Tirumala temple Balayya, slapped a fan who was trying to take a selfie with him. Last month, during the launch event of his 102nd film with director KS Ravi Kumar, he was caught on camera slapping his assistant and instructing him to remove his shoes.

A video of the actor Balakrishna slapping his assistant on the sets of his move went viral on Social Media.Despite his unruly and angry behavior, fans continue to love Balakrishna and celebrate his films when they hit the screens.