Vote For Sreemukhi Ads in Theatres: The controversial reality show Bigg Boss Telugu Season 3 which is being hosted by Akkineni Nagarjuna, is entering its 13th week with a gripping elimination nominations task. All the contestants had to participate in the twelfth elimination nominations task and there was no privilege for any contestant. Mahesh Vitta was the last contestant to be eliminated from the Bigg Boss 3 Telugu.

As the reality show is inching towards its end, the competition among the participants is going tough. Varun Sandesh, Vithika Sheru, Baba Bhaskar, Siva Jyothi, Ali Raza, and Rahul are giving tough competition to Sreemukhi. Now Sreemukhi Army has started advertising campaigns in theatres. They are requesting the movie lovers to vote for Sreemukhi.

Sreemukhi’ fans are giving their full support to her by promoting her in the theatres, but anti-fans of Sreemukhi have started to troll her by saying it ‘paid campaign’ and they are requesting everyone to not vote Sreemukhi.

Vote For Sreemukhi Ads in Theatres

Sreemukhi Paid Mafia Ads in Theatres do not vote her 🙏 #BiggBossTelugu3 pic.twitter.com/r3evCvmLJQ

The Bigg Boss 3 elimination nominations tasks are quite innovative in Bigg Boss Telugu 3. This week the housemates were asked to pick a chit from a bowl. Each chit had a number. Corresponding to each number was a position that housemates had to take from 1 to 7. Each number had a box filled with some material like pearls, mud, etc.

Baba Bhasker, Rahul and Varun Sandesh stand at first, second and third positions respectively. But Varun Sandesh gives his position (third position) to Vithika Sheru. Siva Jyothi objects to this, which leads to an argument between the two. Later Bigg Boss nominated all of them for this week. 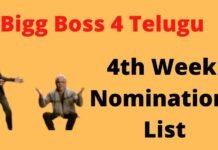