Actor Vijaya Nirmala passed away in June 2019 at Continental Hospital in Hyderabad. She was undergoing treatment there. The veteran actor had starred in over 200 films and directed over 44 in three decades. She made her acting debut as a child actor at the age of five and rose to fame when she had starred opposite Prem Nazir in the 1964 Malayalam film Bhargavi Nilayam.

She was seen opposite Prem Nazir in another film called, Udhyogastha in 1967. After that, she made her debut in the Telugu film industry with the film Panduranga Mahatyam when she was eleven years of age. She has directed star heroes, top actors during her period along with producing movies and making them profitable ventures at the box office. Vijaya Nirmala holds a good number of awards, records to her credit and she even holds the Guinness Book record for having a greater number of directional credits in the film industry by a female director.

The veteran first starred as a leading lady in Tollywood in the movie Rangula Ratnam, in which she acted alongside Vanisri and Anjali Devi. She entered the Guinness Book of Records in the year 2002 for having directed the most number of films as a female director. In the year 2008, the Andhra Pradesh government honored her with the Raghupathi Venkaiah award for her contribution to the Telugu film industry. 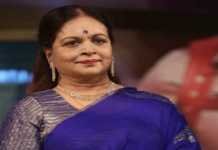