Ugadi 2020 Dates, History, Significance, Pooja Timings: Ugadi is an important festival for most Telugu and practicing Hindu folks. The Ugadi festival marks the beginning of a new year and is celebrated with great enthusiasm across the Telugu lands. People make preparations for the festival days in advance and also make the most of this occasion. While we know what happens, this Ugadi lets’s learn why we do what we do.

This year, Ugadi falls on March 25, 2020, and is called ‘Samavatsara’ which marks the beginning of a 60-year-long cycle. Each of these cycles is identified by a unique name. The etymology of Ugadi is ‘yuga‘ and ‘adi‘, which mean ‘era’ and ‘first’. Hence, its translation would be ‘start of a new era’. Andhra Pradesh, Telangana, and Karnataka celebrate Ugadi while other states use different names like Gudi Padwa and Baisakhi. It is also known as Chaitra Suddha Padhyami.

Chaitra Suddha Padhyami or Chaitra Shukla Pratipada means the first day of the bright fortnight of Chaitra, of the Hindu calendar. This year, the Pratipada Tithi will run between 02:57 pm on March 24 to 05:26 pm on March 25, 2020. According to the Panchangam, it is important for the Pratipada tithi to prevail during one sunrise. There is a possibility that it falls between two sunrises. In that case, the first day is considered celebratory.

The name Yugadi or Ugadi is derived from the Sanskrit words yuga (age) and ādi (beginning): “the beginning of a new age”. Yugadi or Ugadi falls on “Chaitra Shudhdha Paadyami” or the first day of the bright half of the Indian month of Chaitra. This generally falls in late March or early April of the Gregorian calendar.

On Ugadi, people start their day by cleansing their bodies with an oil bath and consuming neem leaves, first thing in the morning. They also clean their houses and decorate doors with fresh mango leaves. This is followed by making colorful rangoli outside the house after sprinkling the area with cow dung water. Every year, a particular earthly element is worshipped, which falls or is associated with the day of the festival. This year, Wednesday falls on mercury, which will be worshipped throughout. 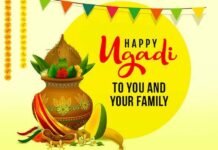 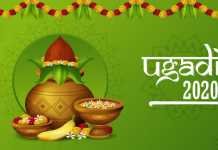