Telangana Police have reportedly booked the Chief Executive Officer (CEO) of TV9 news channel, Ravi Prakash, in the connection with an alleged forgery case. According to the latest update, Alanda Media Entertainments secretary Kaushik Rao has filed a complaint against Ravi Prakash and the Cyberabad police have started the efforts to nab TV9 CEO.

The complaint said that the signature of Kaushik Rao was reportedly forged on a letter which opposed the appointment of three new directors. The complainant also alleged that Ravi Prakash has diverted the funds of TV9 without the consent of the management.

Alanda Media Entertainment Private Limited, a joint venture of My Home Group headed by Jupalli Rameshwar Rao and Megha Engineering and Infrastructure Private Limited Krishna Reddy, which bought over the majority of the stakes in the Associated Broadcasting Company Limited (ABCL) that owned TV9, removed Ravi Prakash from the CEO post. 10TV CEO Singa Rao has been appointed as the new CEO of TV9. 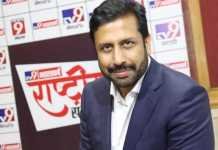