TSRTC Bus Ticket Rates 2019: With the revision of ticket fares by Telangana State Road Transport Corporation (TSRTC), the minimum fare in city ordinary bus has been hiked from Rs.5 to Rs.10. According to officials, the maximum fare, which used to be Rs.30 in city and metro express buses has been revised to Rs.35 while minimum and maximum fares in metro deluxe buses are fixed at Rs.15 and Rs.45 respectively.

To avoid change problem with passengers and conductors, the minimum fare in Pallevelugu services are revised from Rs.6 to Rs.10 and the maximum fare has been hiked from Rs.73 to Rs.100. This apart, fares have also been revised in bus services such as Deluxe, Express, Super Luxury, Garuda, Rajadhani, Vajra and Vennela.

TSRTC hiked the ticket fare in the state after the Telangana Chief Minister Chandrashekhar Rao (KCR) made the decision to make the hike. This hiked ticket fare will come into effect today, December 02 at midnight. (TSRTC Bus Pass Renewal) 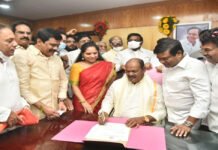