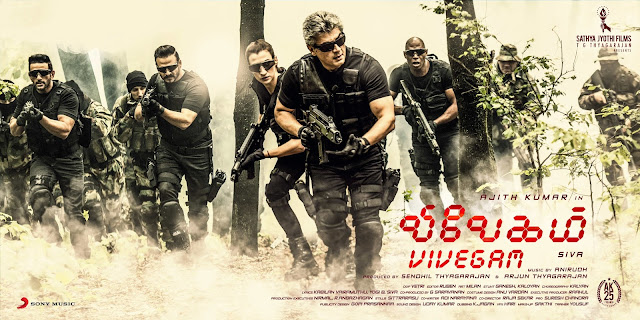 1. Thala Ajith: Just his screen presence is the only one thing is expected for his fans. But for this movie he has given a comeback with a dip of Hollywood style. Based on the first look poster, he has trained so hard to relish his fans. He is acting as an international cop and also as an anti-terrorist squad player, with a twist of Hollywood backdrop.
2. Siruthai Siva: All his earlier collaborations with Thala Ajith, that ‘V’ factor has come out very well starting from Veeram, Vedalam and now with Vivegam. His comforts of molding Ajith to his style is one of his plus factor in all his movies. The characterization in all his movie will have all sorts of comedy, sentiment, action sequences and lots more.
3. Anirudh Ravichander: Rockstar Anirudh has given lots of hits. But this time he has experimented with a twist of Hollywood backdrop which has given a tremendous response from his fans. Seriously his BGM will give goosebumps for all Thala Ajith fans who are present in theatres.
4. Story: Based upon the sneak peek of the story, it will be an ordinary story with which Ajith will be catch hold of all terrorist activities. But not still that, there are lots more with a different backdrop.
5. Cast and Crew: Siruthai Siva mastermind has been misinterpreted by his team and they have visualized in a perfect manner to give a treat for his fans. Entire cast and crew have given its best to give a good Hollywood movie.
In fact, the Vivegam film has received a fabulous response in advance booking and some of the websites crashed due to the high demand of tickets not just in Tamil Nadu, but Kerala and Karnataka as well.Vivegam is produced by Sathya Jyothi Films and Vivegam slated to release on August 24.
Facebook
Twitter
Pinterest
WhatsApp
Telegram
VK