Thop TV CEO Satish Venkateswarlu Arrested in Hyderabad by the Maharashtra cyber nodal cell on Tuesday (14/07/2021) for allegedly illegally streaming and transmitting content of OTT and TV channels, due to which the channels have faced heavy revenue and viewership losses.

As per media reports, a case has been filed by Star India against Thop TV App before the ICC World Test Championship final. The media conglomerate claimed that android software aggregator is a rogue app that offers illegal access to films, shows, and live sports on TV, and OTT content without authorization from the original owner. Also, Read (Best ThopTV Alternatives).

The Police said that other broadcast channels, including Viacom18, had also approached the Maharashtra cyber police with similar complaints. The Thop TV App, which has more than 3000+ live-streaming channels, rose to popularity due to their all-in-one-place availability of popular apps like JioTV, AirtelTV, Prime, Aha, Hotstar, and Zee5 Etc. Since it was illegal, the Thop TV App wasn’t available for download at the official Google Play store. 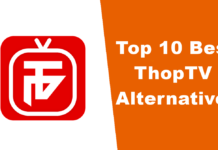