Watch Thipparaa Meesam Trailer was unveiled on YouTube. Thipparaa Meesam Telugu Movie has completed the censor formalities and received U/A certificate, now the film is gearing up for a release on 8th November. Thipparaa Meesam Movie Trailer gives a glimpse of the storyline. Thipparaa Meesam Full movie deals with the story of a frustrated DJ who is having a tough time dealing with his mother. He lives his life on his own terms and condition. Thipparaa Meesam trailer shows that Sree Vishnu has all the negative habits like smoking, drinking, drugs, and girls.

The Thipparaa Meesam background music scored by Suresh Bobbili and Sid’s camerawork is top-notch. There are several action sequences in the trailer and Sree Vishnu’s screen presence is highlighted. Thippara Meesam is directed by Krishna Vijay of Asura fame. Nikki Tamboli is playing the female lead in this film.

Currently, the team is busy with the promotional activities of this film. Asian Cinemas has bought the theatrical rights of the film for a fancy price. The distribution house will release Sree Vishnu starrer in Telugu states. The sources say that Thipparaa Meesam is a crime drama that has a racy screenplay and some terrific premises. The film also has Ravi Prakash and Sreekanth in the supporting roles.

Sree Vishnu has delivered few Telugu hit movies such as Mental Madhilo, Needhi Naadhi Oke Katha, in his filmy career and his previous movie ‘Brochevarevarura’ was also decent hit at the box office. The actor Sree Vishnu is popular for selecting the movies which have different content and genres. Sree Vishnu underwent a complete makeover for his look for this upcoming revenge drama Thipparaa Meesam. 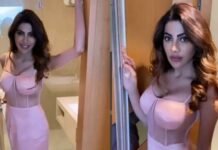