The Married Woman Web Series Starring Ridhi Dogra, Monica Dogra, Suhaas Ahuja, Rahul Vohra, Ayesha Raza Mishra, others and Directed by Sahir Raza. The Married Woman is a beautiful saga of a woman’s journey of self-discovery, set against the background of love and turmoil-filled social fabric. Set amidst the backdrop of Babri Masjid’s demolition in 1992.

The Married Woman web series is a story of Peeplika Khan and Astha Kalra, who are on their journey to find themselves. When these two beautiful souls meet, they instantly realize that they have found a piece of the missing puzzle. what happens when their souls connect? Do they rise above societal boundaries to break free or are they forever trapped?

Despite a promising and gripping storyline, The Married Woman web series fails to tie you in. Spread across 11 episodes, it seems needlessly stretched. More often than not, there is over-simplification, excessive explanation of what the character feels, thinks, or the relationship they live. Be it Astha or Peeplika or Aijaaz or Hemant, each character goes into mundane and detailed monologues when a few crisp lines would have done the work more powerfully. The Married Woman Web Series Watch Online in HD All Episodes Streaming Now on ALTBalaji, ZEE5. 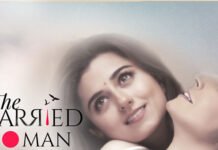