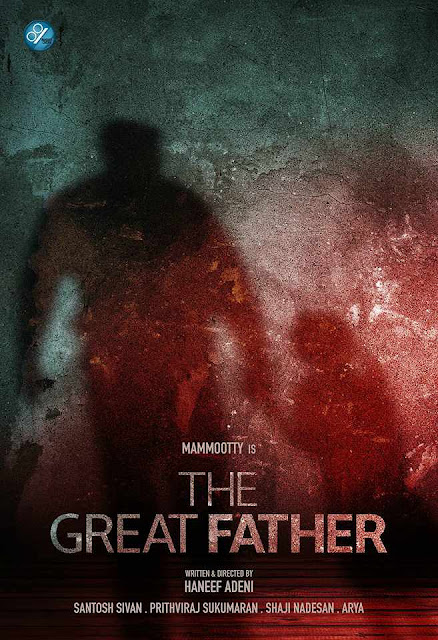 Advertisement
The Great Father Movie Poster: The Malayalam Top star Mammootty is back with another film which is titled as “The Great Father” is written  and directing by Haneef Adeni. The film is produced by Shaji Nadesan, actor Prithviraj Sukumaran, Santhosh Sivan, and Tamil actor Arya under the banner of August Cinema. Megastar Mammootty has revealed the first look poster of The Great Father on facebook.
“The Great Father” The first-look poster is splashed with a dark shade of red and green and shows the shadows of a man walking with a child. It is understood that the megastar will appear in a stylish look in the movie, which is being bankrolled by Prithviraj Sukumaran, Arya, Santhosh Sivan and Shaji Nadesan under the banner of August Cinema. This is the second time the production house is making a Mammootty-starter after the 2013 movie, “Kadal Kadannu Oru Maathukutty.”
Actress Sneha, who has shared screen space with Mammootty in “Thuruppu Gulan,” “Pramani” and “Vande Mataram,” will be paired opposite the star in her comeback movie in Malayalam after 6 years. Baby Sara Arjun, who made her debut in the recently-released “Ann Maria Kalippilaanu,” is also expected to be a part of the upcoming movie.”The Great Father” film is expected to go on floors on Aug. 25.
Advertisement