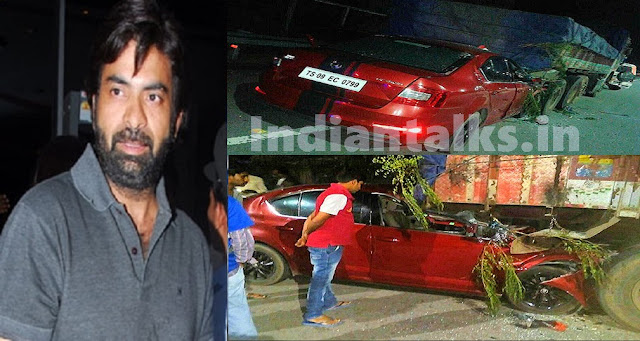 The Tollywood mass maharaja Ravi Teja brother Bharath who is also a character artist and acted in so many films is no more. Yes, Actor Bharath Raju reportedly died in a car crash on the Outer Ring Road (ORR) in Shamshabad on Saturday(June 24th) night. The incident occurred at 10 p.m when 45-year-old B Bharat was driving his red Skoda sedan from Shamshabad to Gachibowli.
The accident took place on Saturday night at Kotwalguda of Shamshabad Mandal, 50 km away from Hyderabad. The 45-year-old Bharat traveling in his car and police have been telling that the car is traveling with over speed and he is spot dead itself. His body has been shifted to Osmania Hospital for postmortem the body will handover to his family.
“He was suspected to be in an inebriated condition, and lost control of the vehicle and hit the lorry that was parked there after developing engine trouble,” said M Mahesh, Inspector, Rajiv Gandhi International Airport.
The Bharat Raju was well known for playing supporting roles in popular movies like Rama Rama Krishna Krishna, Ready, Jump Jilani..etc. We are very sad that he is no more and let’s hope his soul rest in peace.