In an endeavor to encourage the eco-friendly way of lifestyle among the urban populace, the Greater Warangal Municipal Corporation (GWMC) has embarked on a project to construct exclusive cycling tracks and footpaths in ‘Smart Warangal’.

While a four-km long cycling track and footpath (two km on either side of the road) from Fathima Junction to Subedari ‘smart road’ has almost been completed with Rs 1.20 crore, the authorities are going to develop the cycling-track and footpath for a total length of 80 km on the 40 km long ‘smart roads’ taken up under the Smart City Mission (SCM) under the GWMC limits.

As a part of the development of the cycling track and footpath, the officials have already painted the two-meter wide track on the road and also painted it with the symbol of ‘cycle rider’ besides setting up the bollards to discourage the motorcycle and other vehicle users to enter the lane. 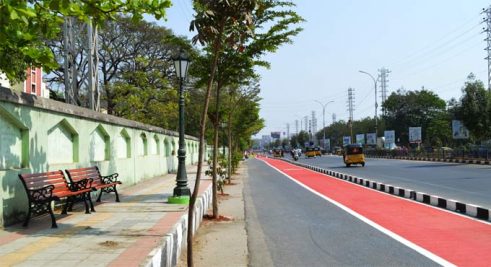 “We have also erected beautifully designed antique lamps and the benches on the footpath, and used special tiles for the construction of the footpath for the comfort the visually challenged people,” said an official adding that they would also set up the variable message signs (VMS) soon on the road between Fathima Junction and Subedari collectorate.

“We have taken up this as a pilot project with a view to encourage the cyclists and provide a space for the pedestrians. Since we are constructing smart roads at a length of 40 km with Rs 350 crore under the SCM, all of them will soon have the dedicated cycling track and footpath,” the official added.

It is said that only 40 cities against a total of 100 cities chosen for the SCM in the country, had come forward to take up the cycling track. It may be worth mentioning here that Minister for Municipal Administration and Urban Development (MAUD) KT Rama Rao has appreciated the GWMC commissioner Pamela Satpathy and her team for executing this beautiful project in a tweet made on Saturday. “Beautiful cycling lanes developed by GWMC promoting healthy lifestyle and also lesser pollution. My compliments to @MC_GWMC and the team. We need many more of these in other towns/cities including Hyderabad too,” he tweeted.

Speaking to ‘Telangana Today’, GWMC Commissioner Pamela Satpathy said that the works of the cycling track between the Fathima Junction and Subedari were almost completed. “We are just waiting for the formal inauguration of the track,” she said adding that the cyclists were already using the track. Godhala Ravinder Reddy, an Assistant General Manager (AGM), in a private company, has thanked the civic body for developing the cycling track. “We need to encourage the people to use bicycles as it would be helpful to keep them physically fit and also help to protect the environment with the cutting down of the vehicle usage,” he added.

Meanwhile, Santhosh Manduva, a citizen activist and founder president of the Sulakshya Seva Samithi, said that the civic body and traffic police must ensure that the cycling track should be free from the vendors and hawkers as they are occupying it. “On the other hand, the parking of the vehicles on the track should be discouraged by the police,” he said and opined that KUC  to NIT road (100 feet road), KU campus, Arts College grounds, Kakaitya Medical College (KMC) campus or anywhere in the outskirts would be more ideal for cycle tracks.