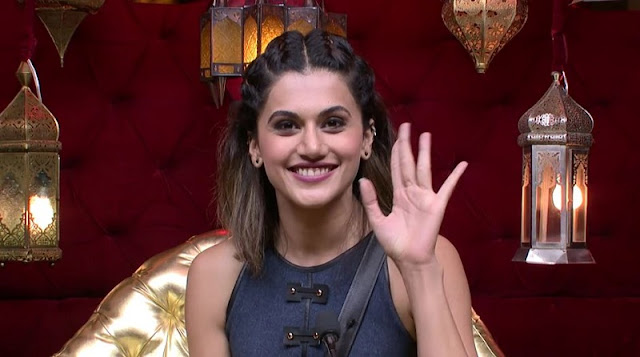 Bigg Boss Telugu: The Controversial reality show Bigg Boss inmates were in for a surprise recently when Rana Dagubatti brought a lot of fun and frolic with his guest appearance and promoted ‘Nene Raju Nene Mantri’. Later Pink beauty  Taapsee Pannu made a special appearance to promote her film Anando Brahma.
Apart from promoting her thriller, Taapsee also quizzed the Bigg Boss Telugu housemates about their play and relationships in the house, and also asked them to mention who they thought would be the winner and loser of the reality show, hosted by Jr.NTR.
Later during the media interaction Taapsee pannu spoke about Bigg Boss and said, “I  knew Mumaith Khan and Navadeep among the contestants and added that few contestants are still conscious of their image.
I was there only for few hours and later I was tired. I couldn’t stay there more in front of cameras.”  The actress further explained that it is really admirable on the part of contestants, by expressing that she could not stay for two and half hours also in Bigg Boss house.
Facebook
Twitter
Pinterest
WhatsApp
Telegram
VK