Theprimetalks.com
Home Bollywood Surekha Sikri Passed Away at 75, Due to Cardiac Arrest
Advertisement

Surekha Sikri Passed Away at 75:

Extremely saddened to learn about the unfortunate demise of Veteran Actress Surekha Sikri Ji. Heartfelt condolences to the family. Our prayers to God for the departed soul & to provide strength to the bereaved family. pic.twitter.com/okGnI5QV2Q

The National Award-winning star Surekha Sikri delivered some fine performances in a career that spanned over four decades. Not just in television, the screen legend was a par-excellent performer in theater and films. It was in 2008 when Surekha Sikri added a major milestone to her acting journey.

The audiences loved her as Kalyani Devi, the stern matriarch in the popular television show Balika Vadhu. As the National School Drama alum bids adieu to the world, we honor her legacy by remembering some of her performances that will remain deeply etched in our memories for years. 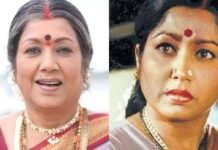 Veteran Actress Jayanthi Passed Away at 76