Theprimetalks.com
Home Bollywood SULTAN Official Trailer Released Out Salman Khan, Anushka Sharma
Advertisement
The makers of ‘Sultan‘ have finally released the trailer of this Salman Khan starrer which indeed again proves to be a delightful treat for all his countless fans out there.‘Sultan’ is directed by Ali Abbas Zafar under the banner of Yash Raj Films. It is slated to release on July 6, 2016. 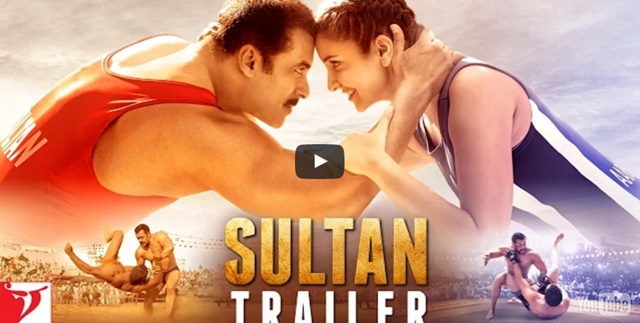 Sulthan Trailer Review : The trailer looks fantastic. The chemistry between Salman Khan and Anushka Sharma is a treat for the sore eyes. The music albums looks all set to be chartbuster if he we go by the the bits we hear in the song. The title track looks all set to a major chartbuster. Anushka Sharma seems to play a sheet anchor role in Salman Khan’s life. The characters of Amit Sadh and Randeep Hooda look equally interesting. Last but not the least, Salman Khan is in top form and looks set to topple his performance in Bajrangi Bhaijaan with this film.

Apart from the ‘Dabangg’ Khan, Anushka Sharma as Aarfa adds one more prime reason why you shouldn’t skip this trailer. The music from composer duo Vishal-Shekhar is simply brilliant and we get to hear some hard hitting beats in this trailer as well. Certainly, as quoted in one of Salman’s films that Eid is coming and he will definitely come to take his Eidi, this time as well the date is set and the countdown has begun now starting with this trailer.