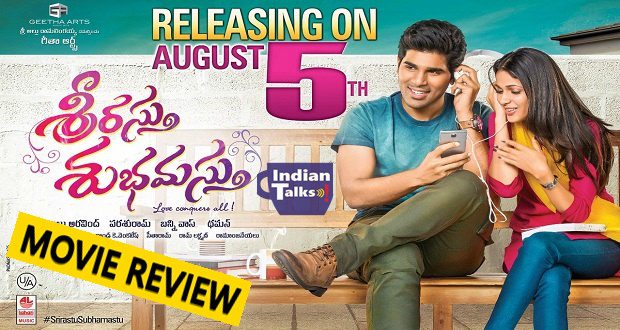 Advertisement
Story: Sirish’s (Allu Sirish) father Prakash Raj is a rich man. Prakash Raj is upset as Sirish’s brother gets married to a middle class girl against his wish. On the other hand, Sirish falls in love with Anu (Lavanya Tripathi). Sirish throws a challenge to his father and tries to impress the Anu without revealing his family background. When things fall in place, Anu’s father (Rao Ramesh) arranges her wedding with another boy. Will Sirish convince both the families and win his lady love forms the rest of the Srirastu Subhamastu story.
Cast Performance :Allu Sirish is okay as Sirish. He improved a lot as compared to his previous  films. He also looks handsome in some shots. Actress Lavanya Tripati is at her best as usual. She looks so beautiful. Satyam Rajesh is good and evoke some laughs in his presence. Prabhas Sreenu is superb and has given laughter moments. Swapnika Reddy as friend of Lavanya Tripati and Prakash Raj is fantastic as a rich father and has taken film to the next level. Rao Ramesh is perfect. Thanikella Bharani and Sumalatha is good. Ravi Prakash is good. Other artists did fine job in their role.
Postives: Allu Sirish has performed well in Srirastu Subhamastu and this movie can be considered as one of his best. Srirastu Subhamastu does complete justice to its title. It is a complete family entertainer with right amount of drama, emotions, romance and comedy. Story narration and screenplay are major assets. Entertainment in the second half, especially between Ali and Subbaraju has to be watched out for. Lavanya Tripathi impresses as Anu and looks pretty.
Srirastu Subhamastu Movie Rating 3.5/5
Verdict: Srirastu Subhamastu Film is another strong contender at the box office for this weekend. 2016 seems to be a great year for directors who have executed the basic story in an interesting way. Allu Sirish strikes gold with Srirastu Subhamastu movie. It is a cool romantic family entertainer that deserves a watch in theatres .
Stay tune IndianTalks For Srirastu Subhamastu Movie Collection updates .
Advertisement