Well, to add more to its gleam, the action drama has garnered the tag of the first Telugu film to cross 100 million views on YouTube. The film’s production house Mythri Movie Makers is happy with this achievement. Since it is their first film, the producers are happy with this biggest achievement. Taking to Twitter, the production house expressed happiness over the same. Sharing the link of the film, they wrote, “Our 1st step crosses 100mn.” Srimanthudu released on August 7th, in the year 2015.

The social message oriented Srimanthudu Full Movie has a story revolving around a young man, Harsha Vardhan who inherits a business realm from his father. When he comes to know the reality of his father’s ancestral roots in the village of Devarakota in Uttarandhra, he adopts the village and tries to improve the life of the people fighting the odds and Harish Uthaman in pivotal roles, the movie grossed nearly Rs 2.0 billion from the worldwide theatrical business. Inspired by the film, many celebs of Tollywood and politicians announced the adoption of remote villages of Andhra Pradesh and Telangana. 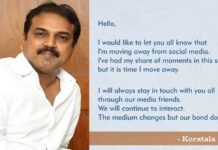