Actress Sridevi Passed Away a year back in Dubai on February 24, 2018. Fans have taken to social media to remember their female superstar on First Sridevi Death Anniversary. The actress Sridevi husband and daughter organized a pooja at the Sridevi’s maternal home in Chennai. Reportedly, Boney Kapoor along with Janhvi Kapoor and Khushi Kapoor visited Chennai to take part in the puja and came back in the morning today.

Boney Kapoor and Khushi Kapoor were even clicked by the paparazzi coming out of the airport in the morning today, on February 24. There are also Sridevi Death Anniversary photos of the three going viral on social media in which the girls can be seen dressed in Traditional South Indian Attires.

Earlier, remembering her mother on Sridevi first death anniversary, Janhvi Kapoor took to social media and shared a beautiful photo. The caption on the photo seemed even more beautiful. The picture she posted has her hands lying comfortably in the lap of her mother. Janhvi Kapoor captioned the picture as, “My heart will always be heavy. But I’ll always be smiling because it has you in it.” (sic) 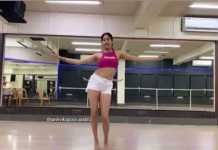