Theprimetalks.com
Home MovieReviews Sri Sri Telugu Movie Review And Rating Hit or Flop Public Talk
Advertisement
Superstar Krishna’s Sri Sri Movie Review,Rating : Superstar Krishna, the first Superstar of Tollywood Film industry still has craze and his revenge action thriller drama “Sri Sri” released today on 3rd June. It is directed by Muppalaneni Siva and produced by Saideeep  Chatla whereas the music is scored by Es Murthy .  It is a family drama and the movie is based on the bonds shared among family members. It also highlights the relation amongst the children and their parents. Let’s see the impact of t he movie on audiences. 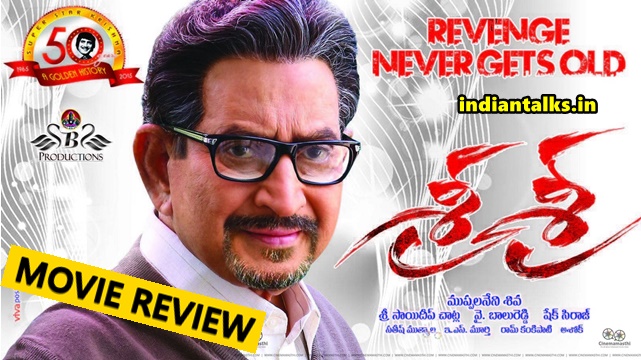 Sri Sri Movie Review : Sri Sri is a action thriller directed by Muppalaneni Siva and produced by Saideeep  Chatla while Es Murthy scored music for this movie.Touted to be a revenge drama, the movie is about a common man, who imbibes the values of Telugu poet and lyricist Srirangam Srinivasarao in his life. Krishna is playing the lead role in the movie, which features his wife Vijaya Nirmala and her son Naresh in important roles. Murli Sharma as J K Bharadwaj is good as protagonist.The movie has Routine and predictable story. Murli Sharma as J K Bharadwaj is good as protagonist. Cinematography by Sateesh Muthyala is good.

Advertisement
Sri Sri Movie Story : Sreepada Srinivasa Rao, Sri Sri (Superstar Krishna) is a retired professor in law, who lives happily with his wife and his children a daughter named Swetha (Angana Roy) and Vishnu and his wife. Swetha is a journalist working in Spy Tv, who follows her father’s way of justice and seeking truth which helps the people. She fights over a drug company named JK Drugs set in a tribal area named Pothurajugudem by which it pollutes water streams and leads to death of people. With the help of Suranna (Sai Kumar), she raises against J K Bharadwaj (Murli Sharma) and Dr. Bikshapathi (Posani Krishna Murali). She collects all the proofs and footages to prove their wrong deeds. She is killed by Rahul, Akash and Vicky, sons of Jk and Bikshapathi infront of Sri Sri eyes. He files a case and seeks justice but fails with the money power of opponent. He then goes to take revenge on them by himself. How he seek revenge form the rest of story.
Performance: Superstar Krishna has done fantastic job in the role of Sri Sri and has given wonderful performance. Once again, he proved that he has ability to rule on Telugu film industry. His presence and wonderful performance, body languages are too good on the screen that grabbed several eyeballs. Vijaya Nirmala has done justification with her role and performed well. She made her fantastic appearance on screen.  Posani Krishna Murali as fake doctor Bikshapathi  is ok. Murli Sharma as J K Bharadwaj delivered his best. Sai Kumar as Surya Rao stole the show by his wonderful performance.  Naresh in the role of cop, who investigate the murder case, has done good job and pulled off his role.
Analysis: The overall movie is average. The major asset of the movie is presence of Superstar Krishna and the voice over of Mahesh Babu. The first fifteen minutes takes to introduce the character in the movie.  Slow screenplay tests the patience of the audiences. Director Muppalaneni Siva has failed to use the stamina of Superstar Krishna who has ability to rule at the box office. The major drawback of the movie is its routine and predictable story line.
Technical Departments : Music by E S Murthy is bad. Songs are a big drawback and does not help the flow of the movie at all. His background music is so loud and good in some scenes. Cinematography by Satheesh Muthyala is good and can be said as a positive work among all average works. Editing by Ram is okay. He cannot help as the screenplay is not so racy. Production values are good.

Final Verdict: Routine and predictable story. Not a great comeback for Superstar.