Theprimetalks.com
Home Videos Spirit Of Chennai Amazing Video Song Will Touch Your Heart !
Advertisement
Spirit Of Chennai Video Song: “Spirit of Chennai” is a 2016 Tamil song composed by C Girinandh and directed by Vikram. The song was made as a flood relief anthem in response to the 2015 South Indian floods which affected Chennai. This Spirit of Chennai Video song is going to be released by Sony Music on YouTube from April 25, 2016, 7 pm onwards. Vikram directed the video, which features real-life heroes who came to the rescue of those affected by the floods alongside top film stars from not just the Tamil film industry but also the Telugu, Kannada, Malayalam and Hindi film industries. 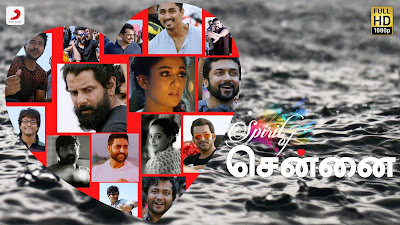 Spirit Of Chennai: This Amazing Song Will Touch Your Heart!

Last year 2015, the city of Chennai went through a challenging phase when floods hit Tamil Nadu’s capital and surrounding areas late November. But amid the chaos and damage, what came through as a shining beacon of hope and humanity was the strong spirit of the city and its people. Not only did organisations come to the ground level to help and rehabilitate people, but those from across the city, and even the country, opened their homes and hearts to help each other out.

It is this ‘never say die’ spirit that actor Vikram has brilliantly captured in his song ‘Spirit of Chennai’, which features a galaxy of stars from not just the Tamil film industry, but also the Telugu, Kannada, Malayalam and Hindi film industries, along with real-life footage of rescue operations during the floods. The Tamil song has been composed by music director C Girinandh, and directed by Vikram himself. The song is a tribute to hundreds of volunteers who came out in aid of the people of Chennai and Cuddalore, when the areas were inundated.

The creative project involves nearly 30 singers from SP Balasubrahmanyam to Aruna Sairam, and features prominent actors such as Abhishek Bachchan, Kushboo, Prabhu Deva, Suriya, among others. The lyrics of the inspiring song have been written by Gana Bala, Madhan Karky and Rokesh.
Advertisement