The Former Bigg Boss contestant Sofia Hayat, who now claims to be a spiritual figure, posted a topless picture on Instagram. Known for many controversies, Sofia Hayat Show Her Bikini Tan Lines in Topless posted a photo on Instagram where she is seen completely topless while covering her assets with her hands. To make the look cheeky, she wore a cap and sun-glasses.

1 hour in the sun! Is that a bikini or tan lines??? #telaviv #hiltonbeach #tanlines #sofiahayat

After this picture, she shared another topless photo where she is seen flaunting her butt, and this time not holding her breasts. She captioned the post with, “Spot the sand.”

Although she now claims to be a nun, Sofia Hayat often posts sensuous and semi-nude pictures on social media. While her genuine fans appreciate her beauty, many others mock her for the same reason. 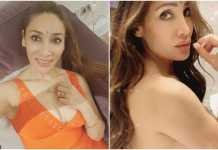