The first look of Gautham Vasudev Menon’s Vendhu Thanindhathu Kaadu Movie starring Silambarasan TR, which was released recently, had created a huge buzz, especially for the physical transformation of the star. While most of them marveled at how the actor Simbu Weight had managed to lose a lot of weight, there were a few who were quite sceptical and wondered if the picture was photoshopped. Now, Simbu Weight Loss Picture Goes Viral on Social Media.

Simbu is said to have lost 15 kilos to play the character in this film, which will be unlike any he has done so far in his career. And on Friday, a pic of the actor showing off his slimmed-down body started trending on social media. It seems to have been shared by the Simbu team to quell rumours of the first look being photoshopped.

Apart from this film, Simbu is also working for Maanadu, which is being directed by Venkat Prabhu. The shoot of this film is wrapped up and the release details of it will be unveiled soon. 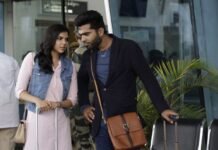