Mass Maharaja Ravi Teja and Shruti Haasan are going to treat the Christmas with the third lyrical video from their upcoming movie ‘Krack.’ But before that, the makers of the film have teased with a terrific romantic poster. It has Shruti Hassan Romantic Touch to Ravi Teja’s Mustache which aptly fits the song ‘Korameesam Polisoda.’ This poster speaks about the chemistry between the lead actors in the Krack film.

A musical of Thaman, he is in super form and for sure, this third song is likely to be soothing composition going by the poster. ‘Krack’ is directed by Gopichand Malineni and is gearing up for Sankranthi release. The Krack film is set on the backdrop of Ongole and crime are peaks in the city. Enters Ravi Teja in his typical mass avatar and takes on the main man behind it.

Ravi Teja’s look is a major attraction and there is a slight change in his attitude may because he is a cop in the film. Tamil actors Samuthirakani and Varalaxmi Sarath Kumar appear in grey shades while Shruti Haasan’s romances with Ravi Teja are presented smartly raising expectations on the talented actor’s roles in the Krack movie in audiences. 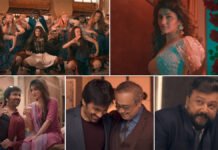