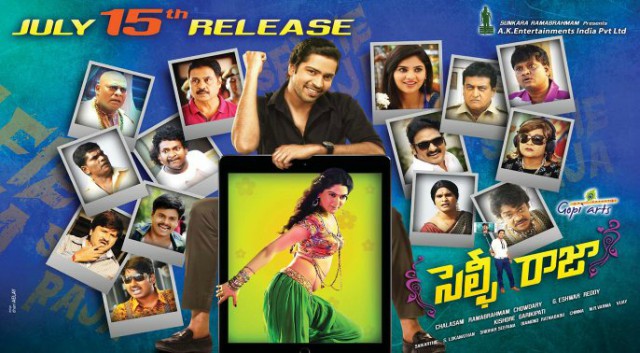 Selfie Raja Review :“Selfie Raja” is a romantic comedy entertainer movie. Written by G Eshwar Reddy, the movie revolves around the story of a hilarious character named Raja (Allari Naresh), who is crazy about selfies. His craze for selfies lands him in several troubles. How he manages to escape from them forms the crux of the story.
Story: The Selfie Raja Movie Story (Allari Naresh) as Selfie Raja is a selfie maniac who is addicted to selfies. He starts his day with a selfie and lands himself into various troubles because of his selfies. He falls in love with Swetha (Kamna Ranawat) who falls for him soon and her father (Nagineedu) who happens to be the police commissioner gives green signal for their love marriage. However a small problems separates Selfie Raja and Swetha after which Selfie Raja decides to kill himself. He approaches a serial killer (Ravi Babu) to kill him after which the real story unfolds. The rest of Selfie Raja film is about the shock and how the shock changes the life of Selfie Raja.
Performances: Allari Naresh who has a comic timing shines throughout the film with his performance. Though the movie has been filled with outdated comedy and uninteresting narration, the actor tried his part to impress the audience in the film. Kamna Ranawat has been limited to her role and she has been decent. Sakshi Chaudary has been glamorous throughout and she did a decent job with the assigned role. Krishna Bhagavan, Sapthagiri and Tagubothu Ramesh did their jobs and tried bringing out some smiles. the Prudhvi is said to be one of the highlights of the movie imitating Rajasekhar from the film Ankusam.
Analysis: Selfie Raja is a very decent attempt by the director, he focused majorly on the comic element. But too many comedians and too many created situations only left the audience a little to confused as to what really is going on the story. Allari Naresh has done a commendable job when it comes to portraying a dual role. Comedian Prudhvi who makes a re-entry in the climax literally left everyone in splits. Good choreography, a few good and funny scenes and decent performance by the actors gives the movie an ‘okay’ status.The Most of the scenes are rather silly and make no sense nor sync with the film. The director has failed to create any logic with the story or the lack of it in the movie.
Final Verdict: The Selfie Raja movie explores the latest trend of selfies that has been proved to be dangerous. If you are not a fan of Allari Naresh you can simply ignore it!
Advertisement