Samra Chaudhry Regrets Whatever Happened: Reacting to the major controversy, Samra said that she has committed a mistake and she regrets whatever happened, according to Pakistani publication The Namal. As many as four videos were out on the internet where nude Samra Chaudhry was seen dancing in a hotel room, while another person was filming her. In one of the videos, a masked man was seen pleasuring Samra.

A senior journalist in Lahore recently spoke to her by telephone to seek her response. Speaking to the journalist, Samra Chaudhry Reacts to Leaked Photos and Video Scandal said she had committed a mistake by indulging in such an act. She said she regrets whatever happened and repents her sins

Before Samra Chaudhry, popular Pakistani singer Rabi Pirzada had also become a victim of cyber-crime. A number of private videos of the singer had gone viral on social media, causing a major controversy. Some reports had claimed that she had recorded the videos for her boyfriend, now husband. 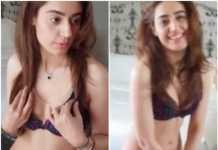