Theprimetalks.com
Home Bollywood Rustom Hindi Movie Official Theatrical Trailer Out
Advertisement
Akshay Kumar Rustom Movie Trailer : Rustom official theatrical trailer has been released by the film makers. Rustom movie features Akshay Kumar in the lead role.‘Rustom’ story line will be showed to  happened in the year 1959 at Bombay. The main theme of ‘Rustom’ film story is one of the Naval Officers killed his wife’s ex-lover and what are the problems that he faces later. 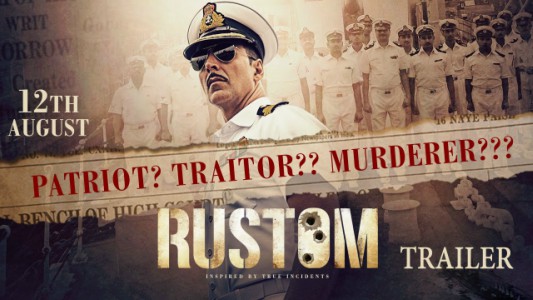 The movie is set in the year 1959 and based on Mumbai. It is adapted from the real sensational case of a naval officer who is brought into the court for killing his wife’s lover named Vikram Makhija. Rustom Trailer Akshay looks handsome and smart in the naval dress.He has donned the white Indian Navy uniform.
The film is tagged with the line “3 shots that shocked the nation” and this tagline is sufficient of creating suspense and thrill for the fans and the cinema goers. The movie plot has been made with colorful and it will undoubtedly appeal the masses. Ileana D’Cruz will be seen in the female lead role and portraying Rustom’s love interest in the flick and it also stars Arjan Bajwa,Esha Gupta in supporting roles.