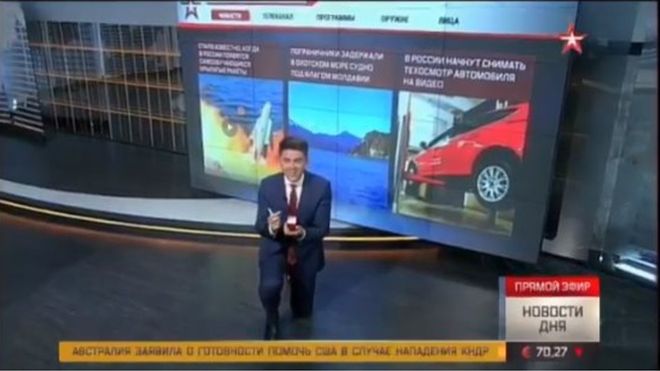 In an attempt to do something unique,  a Russian TV anchor decided to propose his girlfriend on a live show. Yes, you heard it right! Not only he decided, he actually did this.
News anchor Denis Kochanov, the presenter at Zvezda TV, got up from his desk, pulled a red box out of his pocket and got down on one knee, faced the camera and finally proposed to his girlfriend knowing she was watching him on the show.
According to the BBC, he said: “As there is a lack of good news I’d like to add one myself. Margarita Stepanova, will you marry me? I will wait for your answer and hope you say yes.”

Moreover, as per the reports, his girlfriend said “yes”.Zvezda (TV channel) is a Russian nationwide tv network run by the Russian Ministry of Defence.
Facebook
Twitter
Pinterest
WhatsApp
Telegram
VK