International Pop Artiste Rihanna gets trolled on Twitter for sharing a half-nude picture, catching the attention of netizens. It was appalling for her fans to see the picture in which Rihanna goes topless wearing Lord Ganesha Pendant Locket and lavender-colored shorts. Rihanna, who had recently received applause across social media for supporting farmers’ protest, disappointed several of her Indian fans by sharing the photo.

Netizens were quick in spotting the diamond-studded necklace and right-wing supporters started criticizing her saying that she has done a shameful act and also said that she has no respect for Indian Culture.

On the contrary, a few people started praising her that it was appealing to see as she used it as an aesthetic and also said that Feb 15 marks Ganesh Jayanti. Rihanna posted the picture along with a caption which said, “when @PopcaanMusic said “me nuh wan ya wear no lingerie tonight fame girl” @SavageXFenty.”

when @PopcaanMusic said “me nuh wan ya wear no lingerie tonight fa me girl” @SavageXFenty pic.twitter.com/bnrtCZT7FB

BJP leader Ram Kadam took to Twitter to slam the pop star saying that she had no respect for Indian tradition and issues over here and hoped that at least now Congress leaders and Rahul Gandhi would stop taking help from her.

It’s appalling to see how @Rihanna shamefully mocks our beloved Hindu God #Ganesha. This exposes how #Rihanna has no idea or respect for Indian culture, tradition and our issues here. Hopefully, at least now @RahulGandhi and other Congress leaders will stop taking help from her https://t.co/7zUpnO05GL 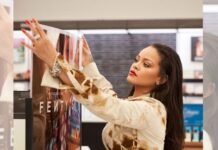 Rihanna’s Fenty Beauty does not engage in audits on slavery, trafficking