Dangerous is a story of two women who have some bad experiences with men and in due course passionately fall in love with each other. The RGV Dangerous film’s story proceeds with how violently they fight the men to protect their love leads to an explosive climax. Talking about the film, Ram Gopal Varma said, “It will be the first in India to culturally elevate the stigma of LGBT after the honorable Supreme Court repealed section 377. My intention is to depict a love story between two women with as much respect and dignity as between a man and a woman.”

RGV further revealed that the film will witness these lovers on the run from cops and robbers both and is entirely shot in Goa. One look at the RGV Dangerous trailer is enough for you to gauge what one can expect from this one. Truth be told, it looks like a seedy drama, replete with titillation and Ram Gopal Varma’s perpetual obsession-the unmistakable love for the thighs! Watch RGV DANGEROUS Movie on Spark OTT. 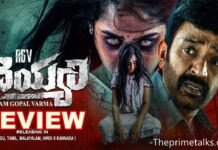