Advertisement
Reliance Jio 4G Tariffs: Reliance Industries’ 42nd annual general meeting (AGM) commenced at 11am 31/08/2016, where the company’s chairman Mukesh Ambani spoke about the biggest launch of the year Reliance Jio.Reliance’s jio has caused a ripple in the market forcing many rival telecom operators to slash their prices for call and data rates. Mukesh Ambani starts the AGM with introducing the “newest and youngest member of the family” – JIO. Have a look at the amazing and unbelievable offers from Mukesh Ambani.
Reliance Industries (RIL) has been testing its 4G Jio service on a pan-India scale. With the announcement of the tariff plans, the conflict between Cellular Operators Association of India (COAI) and the industry giant is expected to end. Recently, Bharti Airtel slashed 4G and 3G mobile internet charges by up to 80% to as low as Rs. 51 per gigabyte (GB) under a special scheme.
Reliance recently launched their 4G-enabled smartphones in the LYF series starting from Rs 2,999, and a portable Wi-Fi router—the JioFi, for Rs 1,999. He said that he wants to dedicate the commencement of Jio to the entire 1.2 billion population of India.

Let’s have a look at Reliance Jio plans announced check out here : 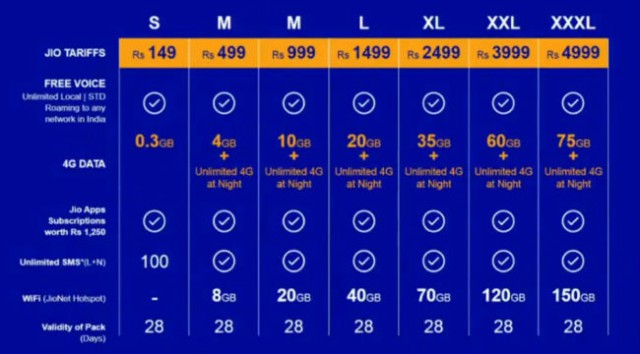 Mukesh Ambani unleashes Reliance Jio, from September 5 to December 31, it will be free for all –Reliance Jio Tariffs

Mukesh Ambani announced that World over, operators charge only for data, voice and messaging are essentially free. All voice calls for Jio offers customers will be absolutely free. Apart from this offers, it is also announced that the complete suite of Jio apps can be utilized free of cost for all the users until the next year December.
Advertisement