The design of Realme Buds Air Neo’s charging case looks identical to the one that comes bundled with the standard Realme Buds Air package. But despite the aesthetic similarities, there might be a few differences under the hood. One of the images on the NCC database shows a Micro-USB cable and the corresponding port for charging the Realme Buds Air Neo. 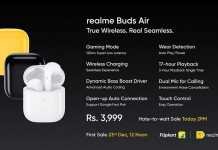