Ram Mandir Ceremony LIVE Updates: Yoga guru Ramdev along with Swami Awadheshanad will be reaching Ayodhya by private plane shortly. Meanwhile, after Priyanka Gandhi made a public statement on the Ram Mandir Ceremony, Madhya Pradesh Congress has announced that 11 silver bricks would be sent to Ayodhya.

Religious rituals got underway in Ayodhya on Monday, two days ahead of the groundbreaking ceremony for a temple at a spot where devotees believe Lord Ram was born. Barricades are already in place in the temple town and Uttar Pradesh Chief Minister Yogi Adityanath issued an appeal, asking only those invited for Wednesday’s “Bhoomi Puja” ceremony to come to Ayodhya.

Adityanath spent hours reviewing the arrangements for the ceremony at the Ram Janmabhoomi, where the temple will be constructed following the go-ahead last year by the Supreme Court. Meanwhile, ‘Ramarchan Puja’, which is a prayer to invite all major gods and goddesses, begins at Ram Janambhoomi site, ahead foundation laying ceremony.

According to Ram Temple trust officials, PM Narendra Modi will proceed to Ram Janmabhoomi or the site of the temple, which thousands of devotees believe was the spot where Lord Ram was born. He will offer prayers to “Ram Lalla” or the idol of infant Ram before going to the stage where the groundbreaking ceremony will take place.

The Prime Minister Narendra Modi will lay a 40-kg silver brick to symbolize the start of construction of the Ram Temple that is core to the ruling BJP’s ideology and poll promises. A campaign for the temple marked the rise of the party to the national spotlight in the 1990s. 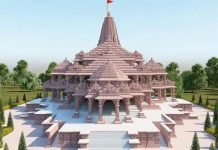