Rajdooth Movie Censor Report: The Real star Srihari’s son Meghamsh is making acting debut with an upcoming entertainer titled Rajdooth. The film has created a decent buzz among the audience with its teaser. As per the latest updates, the Rajdooth Movie Censor formalities completed and is certified with a clean U certificate. Directed by Dasari Carthyk and Arjun has Priyanka Varma as the leading lady in the film.

Rajdooth Full Movie is all set for a grand release on the 12th of July. MLV Satyanarayana is bankrolling the film under his Lakshya Productions banner. Let’s wait and see how the actor will impress the audience with his debut movie. Rajdooth has music by Varun Sunil and cinematography by Vidyasagar Chinta, who are also newcomers, making the movie completely a debutant project, along with the director and the lead cast too making their entry into the industry.

Speaking about Rajdooth, his debut film, Meghamsh said that he is very much excited about being himself on screen. “I want to sit in between a huge crowd and watch the film, to know how I performed. Mom is very happy with the way the film has shaped up. It’s going to be a nice film which has a good story. If dad was alive, I am sure my launch would have been grand. Thanks to god, for giving us such a good mother who even trains us on how to dance,” he added. 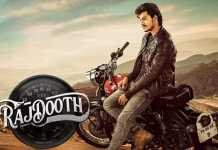