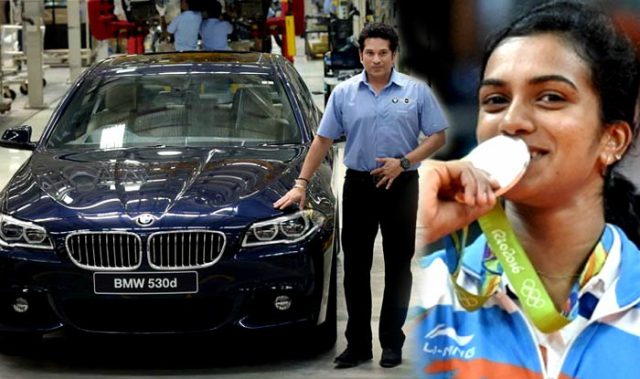 Advertisement
Sachin Tendulkar Gifts BMW Car to PV Sindhu: The Master blaster great indian cricket player Sachin Tendulkar will be presenting a BMW car to PV Sindhu for Making India to Proud. The Hyderabadi badminton star won a silver medal at the Rio Olympics 2016. and She was the first-ever Indian woman to win an Olympic Silver after she stepped on to the podium as the runner-up in the women’s singles badminton event
The BMW car is being sponsored by Sachin Tendulkar’s close friend and president of Hyderabad Badminton Association of India V Chamundeswaranath.”Sindhu will be gifted a BMW car by Mr Chamudeswaranath and his friends. Mr Sachin Tendulkar will be presenting the car to Sindhu,” said Punnaiah Choudary, BAI Secretary (Tournaments), who had accompanied the team in Rio.
Chamudeswaranath, president of Hyderabad Badminton Association of India friend of Sachin Tendulkar, said, “Tendulkar will visit Hyderabad on August 28 to gift the car to Pv Sindhu. We will decide on the schedule and venue for the event shortly,” reported media. Chamundeswaranath is also sponsoring the gift, it is learnt.
The Master Blaster Sachin Tendulkar did something similar in 2012 when he gifted a BWM to Saina Nehwal after she bagged a bronze medal at London Olympics.Back then, Tendulkar had also presented a Maruti Swift car to Pv Sindhu, who had won the girls’ singles title in the Asian Youth Under-19 Championship in 2012.Stay tune for more Sports news IndianTalks .
Advertisement