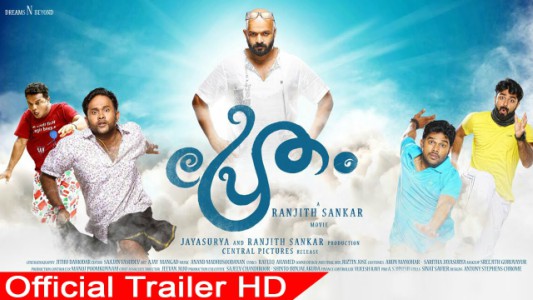 Shruthi Ramachandran and Pearle Maaney play the lead female character. Dharmajan, Sunil Sugatha, Devan, Harish Perady, Sathi Premji are the other prominent roles in the film. Most portions of the movie were shot in a resort in Cherai. The Pretham Film is Produced by the actor-director duo under their home banner of Dreams N Beyond. Jayasurya starrer “Pretham” movie is scheduled to lock horns with the actor’s action thriller “Inspector Dawood Dawood Ibrahim,” which is set to hit the screens on 12 August 2016.

The Pretham Trailer of Jayasurya starrer has been released and expectations are riding high on Pretham Movie.The video shows Jayasurya as a mystery man who is reportedly said to be playing the role of a mentalist named Don Bosco. While it seems Govind Padmasoorya aka GP is a Zumba dancer, the role of others like Pearly Maaney, Aju Varghese, Sharafudheen are not known.
Advertisement